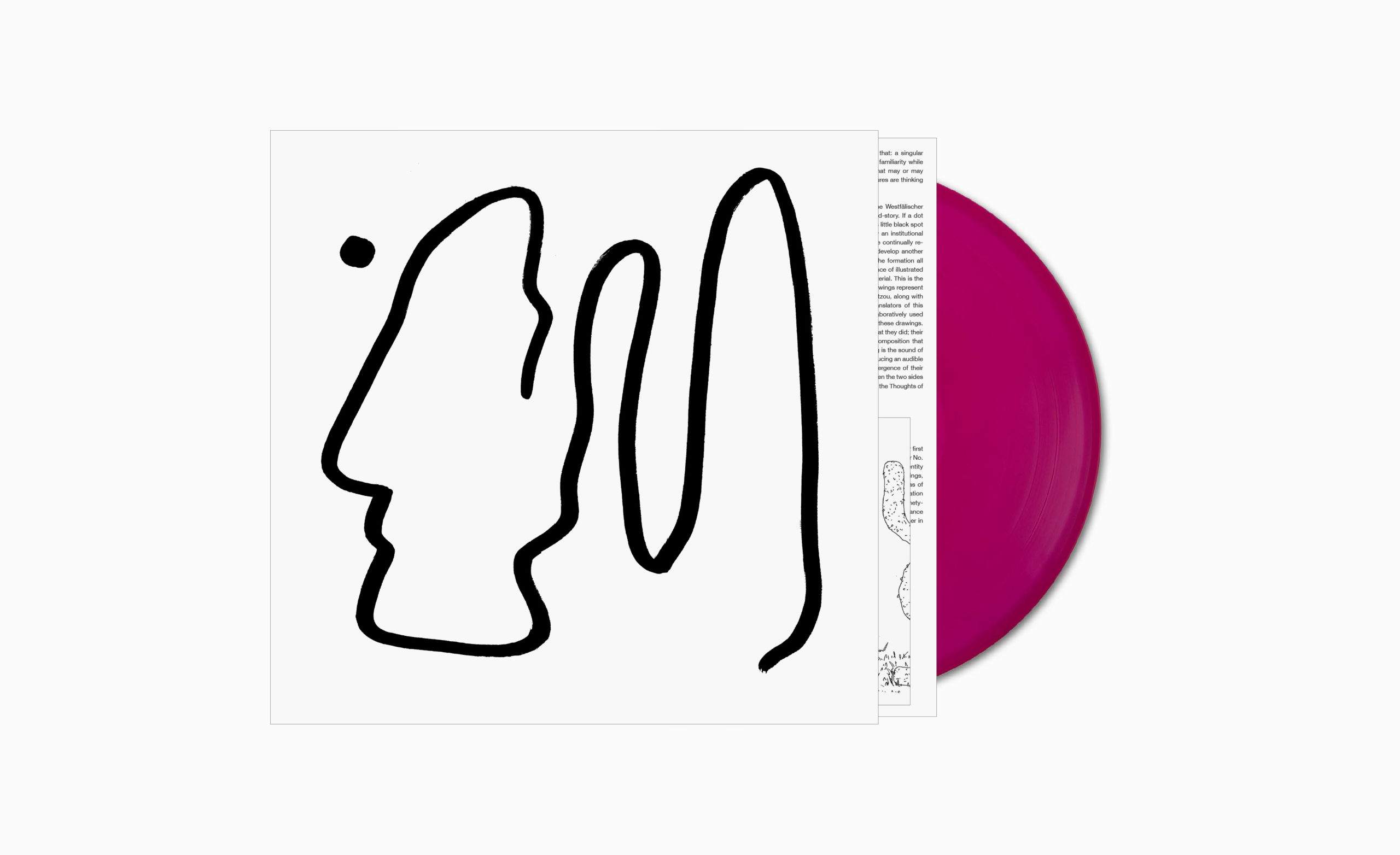 A1. Cactus with Vent
A2. Hot Tub
A3. Large Suess Plant
A4. Tombstones
A5. Brick with Modern Form (B. Hepworth)

B1. Alfred Hitchcock Haze
B2. Rock House with Door
B3. String of Objects with Planter
B4. Nub with Three Wraps of Fabric
B5. Fingers of Thought

Thoughts of a Dot as it Travels a Surface is the title of an album derived from a series of wall drawings begun in 2014 by multi-disciplinary Paris-based artist Zin Taylor. Drawn in simple black-and-white, the large-scale pieces depict linear landscapes populated with rough-hewn objects: potted cacti, sculptural boulders, steaming stone baths. Taylor describes the project as “a psychological backdrop,” utilizing the reductive yet narrative techniques of caricature and illustration to achieve an abbreviated, associative form of visual storytelling. Or in his words: “Think of it as haze collecting along the surface of the wall.”

Upon completion of a particularly ambitious 90-meter panoramic wall drawing, experimental composers Christina Vantzou and John Also Bennett were invited to interpret the work as a musical graphic score. The result was a forty minute live performance in two parts, which was multi-track recorded and then mixed down into a 10-track album. Each piece and title corresponds to a specific section or object in the wall drawing. Vantzou, though based in Brussels, is best known for a string of enigmatic solo recordings for the American ambient imprint Kranky, while Bennett has explored electronic sound design in a variety of capacities, including as one third of Brooklyn synthesizer outfit Forma. Working under their initials – CV & JAB – they attempted to translate Taylor’s elusive gestural lexicon into sound. The results are appropriately minimal, malleable, and mysterious.

The recordings, like Taylor’s nuanced mini-murals, exude a subtle but restless energy, rarely lingering too long in a fixed formation. The whooshing astral synthesizer of “Alfred Hitchcock Haze” dissolves invisibly into the smeared, somber séance of “Rock House With Door,” which in turn evaporates amongst the menagerie of chattering printers, running water, and shepherd tone whispers of “String of Objects With Planter.”

More so than in past projects, here Vantzou and Bennett mask their presence, allowing textures and tonalities to tangle or unspool with minimal intrusion. The effect is naturalistic, impersonal, and intriguing. Even the few passages of relatively emotive classical piano (“Brick With Modern Form,” “Fingers Of Thought”) are played with an air of otherworldly detachment, as though such beauty was materializing purely of its own accord.

Christina Vantzou is a Missouri native of Greek descent who resides in Brussels, Belgium. She has explored sound for over a decade and also conducts ongoing visual research, mostly in animation, film, and highspeed photography. Her musical releases are largely associated with the American label Kranky and her performances are characterized by a loosening of time.

John Also Bennett is an American musician, composer, and sound designer who primarily utilizes synthesis alongside acoustic instruments including flute and piano. In addition to composing and performing under his own name he is a member of the trio Forma and the duo Seabat, and is active with various other collaborative projects.