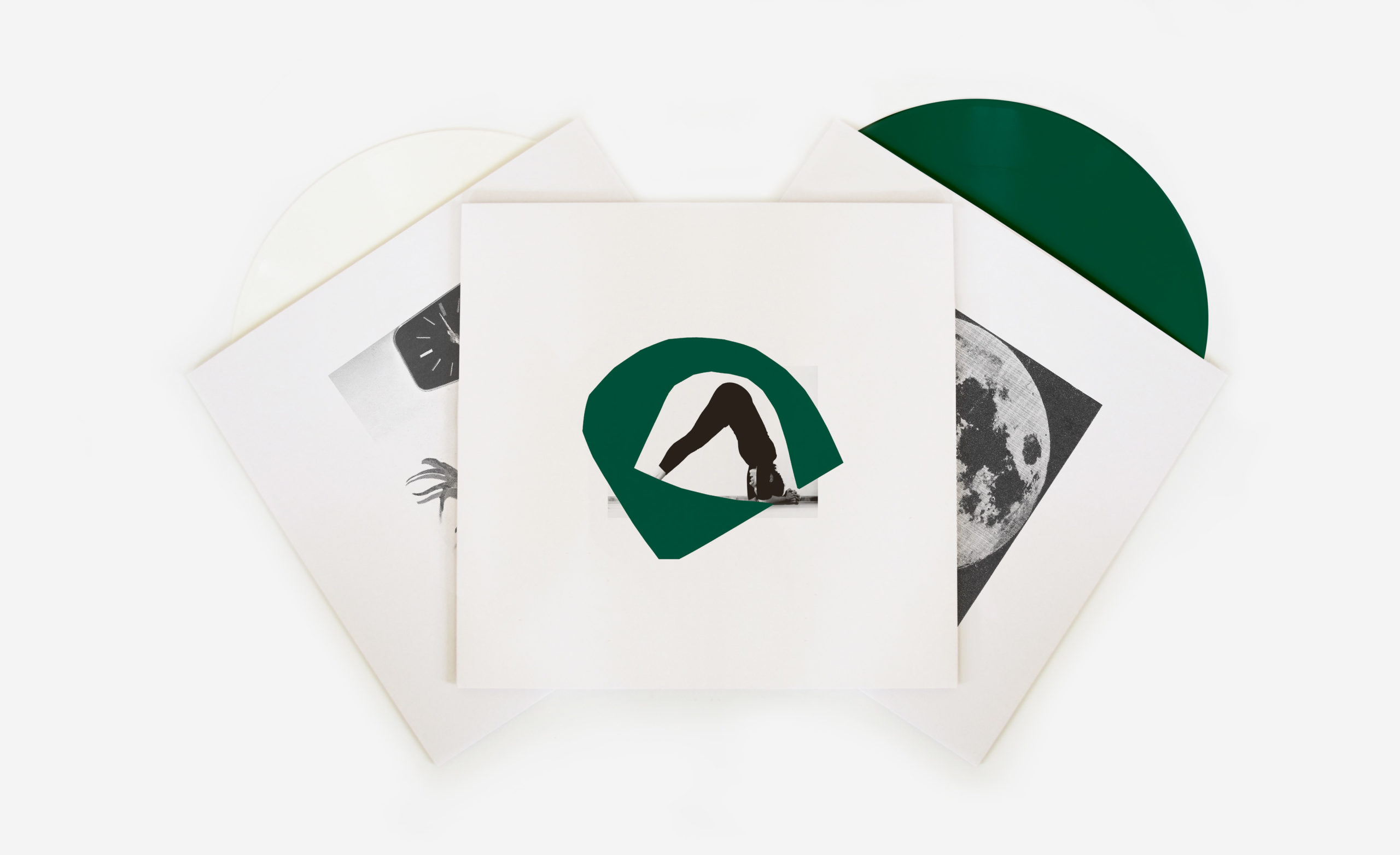 Mastered and cut by Helmut Erler at D+M.

Félicia Atkinson new full length album, ‘Hand In Hand’ is an expanded development of her musical compositions started with the highly-acclaimed A Readymade Ceremony released on Shelter Press in 2015, and follows her collaborative effort with Jefre Cantu-Ledesma Comme Un Seul Narcisse (Shelter Press, 2016).

Composed over the year of 2016 at EMS during a snow storm and at home in Brittany, Hand in Hand could be considered as the most ambitious body of work recorded by the French musician and artist.

Doubt and Optimism are the two sides of a same coin. Hand in Hand is arid and warm in its whole synchrony and opposition. Days are burning and nights are made of ice. Coyotes are exchanging sounds with rattles snakes while bunnies are hiding. Strident modular sounds are tearing apart minimal beats and drones. The stories told by A Voice to the auditor are no longer fictions and become slowly reality.

Electric waves transmitted by living creatures and machines seem to deliver special sounds and frequencies that only non-human can hear. They grow and vibrate despite of the walls and interdictions. Therefore, the human who is listening to this record might find in it a particular kind of emotion a way to take space in silence, and frame a certain vision of thinking while losing a certain notion of time, acknowledging step by step its universal environment. Plants, galaxies, animals, machines, Hand in Hand.

This record is meant to be a moment of common thinking and listening in its diversity and abstraction. In the same way a sci-fi novel by Philip K. Dick or a sculpture by Guy Mees can be percieved: trivial, sensitive and mysterious at the same time.

The opening track, I’m Following You is a bleached romantic ballad for Fender Rhodes that could be the ending title of a Martian love story, whereas Visnaga praises the resources of a desert plant through asmr voices, field recordings and evasive chords. A House A Dance A Poem is a feminist hymn composed as a pyramidal structure, referring in the same time to the A-frame houses, the yoga position of the triangle, the first letter of the roman alphabet and the feminine sex. In the closing song, No Fear But Anticipation, Atkinson offers an open hearted plea about the existentialist necessity of finding desire even when the times seem too dark to think about it. A telepathic and non-scholastic anthem for Don Delillo, Joan Didion and Jean Paul Sartre. The final Buchla sounds that close the record seem to deliver an unspeakable message that only birds and aliens could transcript.

The echo of the 80’s sci-fi anxious aethetics resonates with today’s transparency of digital sounds in the whole record. The cohabitation of simple midi textures and historical Serge and Buchla signals are convoked and confronted together by A Voice. The human instrument appears here as the epicenter of the recordings, giving to the others instruments a gravitational point.

Joan La Barbara, Robert Ashley or Delia Derbyshire are the main influences of Atkinson in their own way of inviting fiction, composition and abstraction as the essential materials of composition. For Hand In Hand, Félicia Atkinson used different sources for the lyrics and scores of her tracks: house plant instruction books, Desert Magazine old issues, architecture manuals, JG Ballard and K. Dick’s books, as well as her own poetry.

Félicia Atkinson will premiere Hand In Hand for GRM’s festival Presences Electroniques with a 16 channels diffusion. A 7 hours extended version of the record, conceived as an evironmental audio book will be broadcasted for 2 months at La Criée Center for Contemporary Art from April 1 to May 31 in Rennes (FR).

Félicia Atkinson (Paris, b. 1981) is a french composer and visual artist, currently living in Rennes, France.

After graduating from the French art school Les Beaux Arts de Paris, a city where she started to make art and music under her own name, she moved to Brussels in 2009 to persue her artistic carrier, developping a wide visual body of work mainly focusing on sculpture and painting. It’s also there that she began to record music under the moniker Je Suis Le Petit Chevalier. Between 2010 and 2013, she released albums with this moniker on labels such as Shelter Press, NNA, Aguirre, Digitalis.

The year 2011 was the year of two albums recorded under her own name and recorded mainly with rhodes and guitar: The Driver (Hibernate) and O-Re-Gon (Home Normal). Mexico-based label Umor Rex will released a collection of B-Sides and rare tracks in 2013 on the double LP ‘Visions / Voices’.

Nature and contemplation playing a central role in her creative process, she relocates in 2013 for two years in the French Alps where she records at home her highly acclaimed album A Readymade Ceremony and the material for her collaborative album with NY-based musician Jefre Cantu-Ledesma Comme Un Seul Narcisse, both released on Shelter Press. With those two albums, she reaches a new milestone in her musical research, defining the seminal elements of her actual composition tools: concrete music, asmr voices, minimal electronics, field recordings, improvisation with guitar and piano, abstract distortions and infra basses, always held by a strong sense of musical harmony.

Currently based on the French Atlantic west coast where she shares her time between her artistic carrier and musical practice, she composed Hand In Hand (Shelter Press, 2017), her most ambitious release to date. It’s in this new context that the problematics of sound instalation, multichannel diffusion, and performance are starting to play a key role in her musical practice.

It’s also in 2016 – 2017 that Félicia Atkinson exhibited her visual work the most with various solo exhibitions and performances in galleries and contemporary art centers around the world.

Félicia Atkinson co-runs Shelter Press with Bartolomé Sanson from its beginning in 2012.