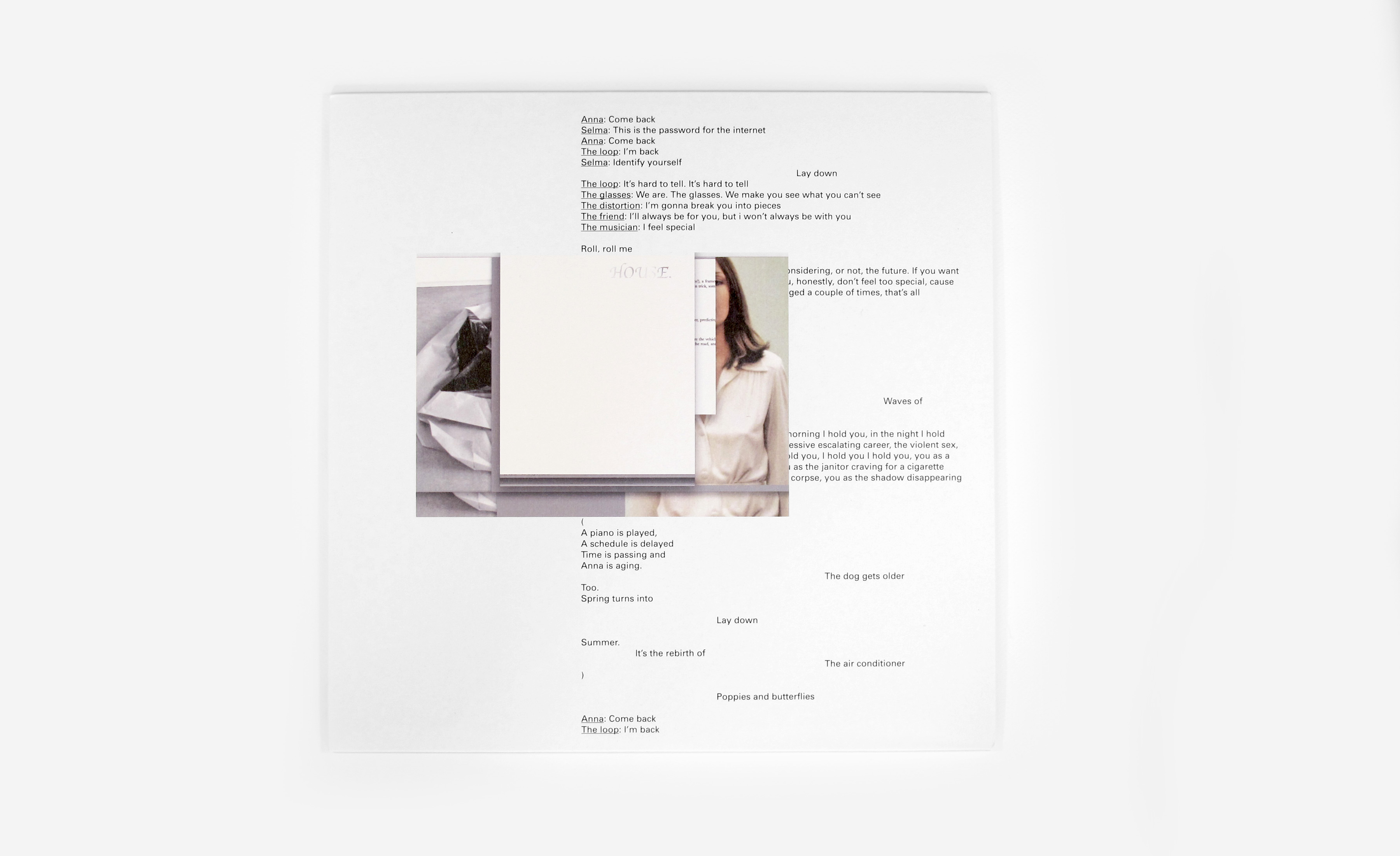 All music by Felicia Atkinson
Mastered by Helmut Erler at D+M
Design by Bartolomé Sanson
Out on Mar. 17, 2015

A1. Against Archives
A2. L’Oeil
B1. The book is the territory
B2. Carve the concept and the artichoke
B3. Recherche de la base et du sommet

Relocated in the french Alps following a 5 years exile in Belgium, Felicia Atkinson returns on Shelter Press with A Readymade Ceremony, a concrete / post-digital oratorio in 5 parts.
Composed and recorded at home and on the Oregon coast, the opus documents a full range of bridges happening in Atkinson’s work. It documents the gather of her early-musical studies with her actual musical practice, the reunion of her two main projects — under her own name and Je Suis Le Petit Chevalier — and finally affirms the obvious link between her visual and sonic body of work.

Felicia Atkinson is a visual artist, a writer and musician graduated from Les Beaux-Arts de Paris. Her visual works – sculptures, paintings, installations and collages – includes a variety of media gathered together through the use of improvisation and its patterns such as delay, loop and saturations, with a chosen list of special tools : clay, silk, spray paint, watercolor, wood, or digital images…
Using the improvisation as a main technique to play music, write poetry and make art, her latest output is the book Improvising Sculpture as Delayed Fiction, a fiction / play published by Shelter Press in the fall of 2014.
Pursuing a radical position in the art world with the use of a publishing / economical autonomy as a very crucial element driving her carrier, this LP has been entirely recorded on her laptop using a super basic software. Felicia Atkinson reaffirms here the importance of the DIY in her creating process : the artist-run space as a place to exhibit, the studio space as a whole territory to record, the book as a score, the record itself as a proper documentation for a possible sculpture.

A readymade as the migration of one thing to another one’s context, involving a change of status, of genre, of politics. A ceremony as a possible gathering, a community shared moment, a happening, a celebration, a protest.

The first foundation of A Readymade Ceremony is the text, spread along the 5 tracks building the record. The text is a collage of extracts of Improvising Sculpture as Delayed Fictions (Félicia Atkinson, 2014), Recherche de la Base et du Sommet (René Char, 1955), and Madame Edwarda (Georges Bataille, 1937), and some random texts lying around while Atkinson was playing, mostly picked in the italian magazine Mousse.

The other founding element is Atkinson’s getting back to her first encounter with contemporary music. Starting her musical education at the age of 4 acquiring music skills with the Martenot Method – a method that emphasis on rhythm and an intuitive and phenomenological learning of sound – she also got the chance to encounter at school the Structures Baschet from the Frères Baschet.

She then learned harp and piano before dropping it at 14, when she got more interested in theatre and indie rock. That is the moment she discovered the texts of the heritage of French literature such as Georges Bataille, Antonin Artaud, René Char, Henri Michaux or Jean Genet. Writers she convokes again 17 years after on this new record.
As a student she did a crucial workshop with Christian Wolff who made the art school students interpret Cornelius Cardew, and play music with stones and kitchen wares at the school’s chapel. At same time she became interested by John Cage, Fluxus, Robert Ashley, Morton Feldman, electro-acoustic music and contemporary art… and began to play music and do art…
But it took her more than 10 years to acknowledge and digest those influences… blending them with rougher materials such as noise, punk rock, drone, folk and electronic music, but also cinema from the 70’s such as Brian de Palma, Nicolas Roeg, or Dario Argento…. There’s something about a possible scary music that happens here, from a feeling she felt while listening to Pierre Henry’s ‘Apocalypse de Jean’ as a kid: something scary and beautiful in the same time….something uncanny, as Ruth White reciting Baudelaire… as a readymade ceremony.

And now let’s ask four questions to the tracklisting, and give one answer :

Against Archives / What could be the answer of a french woman in her 30’s answering to this mostly-masculine core of references?
L’oeil / What about asking a sweater or an electronic device to speak?
The book is the territory / It’s all about nostalgia : how the shifting of time changes our vision of the past and the future, like an echo or a delay ?
Carve the concept and the artichoke / Is this a waiting room? the prologue of an inexistent play or an introduction for a possible delayed climax ?
Recherche de la base et du sommet / Meaning « research of the base and the peak » in french, as a raw reading of René Char. «  There is always a lack in the accident. there is  no accident in the expression . (..) the poet is not made of wood. The mouth and the eye speak separately »